BONUS: An Introduction to James

I can remember studying the book of James at summer camp for a week back when I was around twelve.  With James’ practical focus, it was the first time I ever realized the Bible actually did relate to everyday life.  This great little book, written most people think by Jesus’ own brother James (Gal. 1:19), will yield a week full of wonderful lessons once again so many years later.

James is typically classified as a “general epistle,” meaning it was likely written to be circulated amongst several churches and therefore had a broader focus as opposed to most of Paul’s letters which seem to have been written to address a particular situation going on in one specific church.  This does seem to be true.  James has no personal details at all.  However, as I read through the book with a group of students recently I was struck by how many times proper relationships between rich and poor Christians occurred in the book.  That has to be related to something going on in the background of this letter, though the details may be lost forever.

James was likely written to Jewish Christians.  James says their meeting place was a “synagogue” (2:2), the Jewish law is discussed with great familiarity, and the recipients are called “the twelve tribes,” probably a reference to Israel (1:1).  The recipients are said to be “scattered among the nations” (1:1).  James played a leading role in the church in Jerusalem so likely he is writing to Jewish Christians who had to flee from Judea when persecutions of Christians started (see Acts 11:19).  Ever the leader, James is pastoring his scattered flock.

James is best known for the strong argument in the second half of chapter two that faith is only real if it is active.  If one comes to James with a belief that faith is purely a matter of the mind and that good works are of no worth to God, he or she would probably join Martin Luther in disparaging the book of James; Luther called James “an epistle of straw, for it has nothing of the nature of the Gospel about it.”

James 1:27 nicely puts together these ideas and serves as an appropriate theme verse:

As far as God the father is concerned, pure, unsullied devotion works like this: you should visit orphans and widows in their sorrow, and prevent the world [from] leaving its dirty smudge on you.

Over the next week we are guaranteed some very practical lessons from this part of Scripture that in my mind is closest to the teachings of Jesus or the Wisdom Literature of the Old Testament.  How appropriate that James would sound a lot like his brother Jesus! 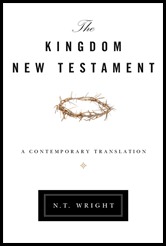