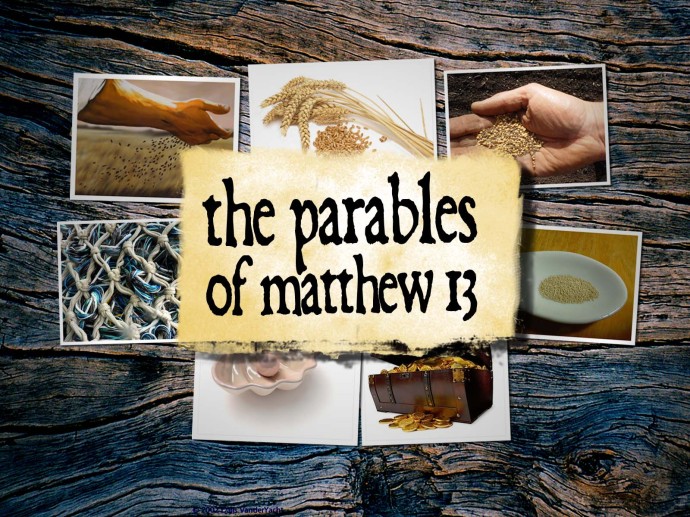 I absolutely love the parables.  They are most certainly my favorite form of literature in the gospels.  Matthew has packed this chapter full of them.

Some pieces of art or music or literature are just better appreciated in their original state without much explanation.  I do believe that is often true of the parables.  So, today I am running the risk of ruining great art.  Please forgive.  What is Jesus saying about the kingdom in these parables?

The kingdom of heaven is mysterious:  There is no telling when we will brush up against true Kingdom.  We might be in the middle of our everyday tasks and run upon a move of God that is unlike anything we have ever seen before.  We might simply be walking home, and over there in the corner of a yard under a tree, where we least expected it, will be something more valuable than anything we have.  We just thought it was another hum-drum day, but this is the day that changes our life.

The kingdom of heaven is valuable:  In a world that often lacks any substance or value, when we find God’s Kingdom, we will do anything to have it.  It is worth more than anything we presently have.  We know this is something real and valuable.  It might necessitate a relocation or a restructuring of our life, but we will gladly do it.  There will be sacrifices, but they are small in comparison.

The kingdom of heaven grows abundantly:  The Kingdom usually starts in humble beginnings.  We might look at it and say this won’t amount to much, but often that is exactly where God plants the seeds of His Kingdom and they grow into something that is so much bigger than what we could do ourselves.  And those pursuits bring help and nourishment to others.

The kingdom of heaven is messy:  This isn’t going to go smoothly.  God is working to advance His Kingdom in this world, but there are powers of evil and darkness that want the same soul-territory.  Right alongside Kingdom will be anti-kingdom.  There are people who will swallow up any seed of hope we might plant in another person.  “The world’s worries and the seduction of wealth” choke our devotion like thorns and strong weeds (13:22).  Purification and complete rescue won’t come until the end.

Those with ears to hear and eyes to see will know where Jesus is coming from.  Others won’t.  For some Jesus is just too familiar.  But those who do hear and see are more blessed than even the prophets of old (13:16-17).

Which parable resonates most strongly with you in this reading?  Why?