Matthew 9: Bring a Friend Along 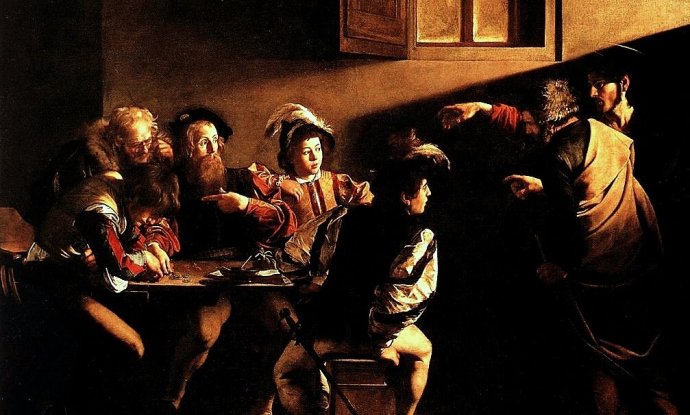 Caravaggio, "The Calling of St. Matthew"

As Jesus was walking along, he saw a man called Matthew sitting in the tax-office.

“Follow me!” he said to him.  And he rose up and followed him.

Matthew wasn’t exactly the ideal candidate for a disciple to an itinerant Jewish rabbi.  He would have been a Jew, but many would have labeled him a traitor.  As a tax collector he was working for the enemy, the Romans.  Good Jews wanted out from under the Roman thumb, and Matthew was only perpetuating foreign tyranny.  Not to mention the assumption that Matthew was likely skimming a bit of the tax money off the top for himself, just like every other tax collector did.  So just the fact that Jesus would call Matthew to be a disciple was unexpected.

It is what Matthew did next that struck me today.

Matthew is leaving his life as a tax collector.  He is about to start a very different kind of life, dissimilar in ways he probably doesn’t even realize.  Still, he calls his friends to his house for one last party.  We can tell from verse 11 that this group of friends was composed of fellow tax collectors and other unsavory people.

Yes, Matthew is leaving his profession and even this town.  But he doesn’t just drop everything.  He is starting a new life, but he chooses to include his friends in this new life too.  It seems he wants his old friends to meet his new rabbi.

Did some of these friends become disciples too?  Did they come along with Jesus and Matthew?  We don’t know, but we do known that Matthew’s first act of witnessing was to his very own friends.  He wanted his friends to know Jesus too.

What struck you in this active chapter?

9 thoughts on “Matthew 9: Bring a Friend Along”